At Netresearch, we use JIRA for bug and issue tracking, and Gitorious for Git repository hosting and management.

Connecting both tools was a long-standing dream we had: Seeing commits directly in JIRA speeds up code reviews, and makes code activity more visible to other people.

Ways to connect JIRA to Git

Our scenery was as following:

We had to connect them both somehow. Here is a list of methods to show Git commits in JIRA:

Apart from that, you have to configure every single repository in JIRA itself. Do that 500 times.

So this was no solution for us. If you want to try it, the
source is still available on github.

Someone took source of the old Old JIRA Git Plugin, updated it for JIRA 5 and now sells it as Git Version Control Viewer for the price tag of 700$ for 50 users.

The issues are the same with the old, free plugin - no solution for us.

FishEye is Atlassian's premier source code hosting application, and is nicely integrated with JIRA via the FishEye plugin.

The problem is that it would completely replace our Gitorious server, something we're not willing to do.

It also costs 2200 US$ initially for 50 users, and the same amount every following year if you want updates.

So again not a solution for us, since we don't want to replace our source code server just to get JIRA integration.

Stash is also from Atlassian, offering Git hosting only. The connection to JIRA is made via the JIRA FishEye plugin.

We would also have to throw away Gitorious to make use of it, and had to pay 3300 US$ for it. It's also in its infancy and not very feature-rich yet.

Again something we didn't want to use.

Implementing the JIRA connection ourselves

Since there were no usable solutions for us to get JIRA and Gitorious connected, we decided to build it on our own.

We had the following choices:

Option 1 was the most promising one, and so we chose to take the reverse engineering route.

After doing that for some hours, I remembered Kore giving a talk about BSOAD, the Browser-SOA-Debugger, at the Berlin PHP Usergroup.

It was a real pain to setup, but after one or two hours it worked and showed me the jabber between JIRA and FishEye: 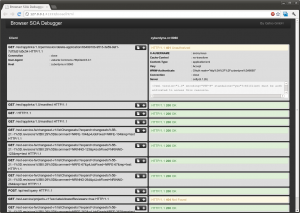 Unfortunately, it had some bugs (including a really serious one that broke all XML display, making BSOAD unusable for me). Since it was still the best software for capturing those HTTP requests, I fixed the bugs and sent pull requests #1 and #4 for BSOAD, as well as patches #5 and #6 for bdog.

After 2 days, the basic implementation was working, showing commits in JIRA for one repository. JIRA still crashed in the project view.

After 4 days, everything was smooth: No JIRA crashes anymore, and new repositories on Gitorious automatically got their hook registered
via a cron job. Links to Gitorious were working, too.

The result of our work is Klonfisch, running here at Netresearch for weeks without problems.

You can get it from the netresearch/klonfisch repository on github, along with detailled instructions how to get it up and running.

Klonfisch is a PHP application that sits between JIRA and Gitorious:

Gitorious sends commit information to Klonfisch which stores them in a MySQL database. This is done via "web hooks".

JIRA on the other hand talks to Klonfisch, asking for commit information
for projects or single issues. Klonfisch searches in the commit database and returns them to JIRA. JIRA then displays the commits in the "Source" tab of issues and projects.

You just have to install the FishEye plugin for JIRA, which takes care of talking to Klonfisch and the commit visualization. 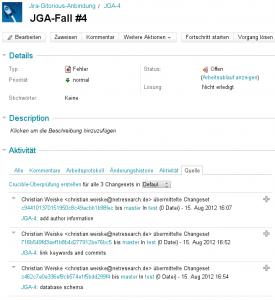 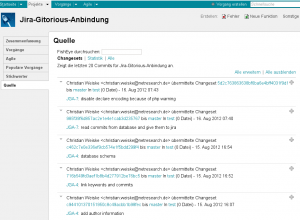